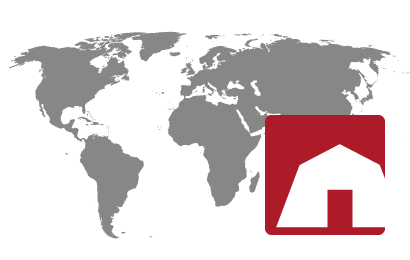 An all-time high: over 100 million people worldwide have fled their homes. Wars, persecution, famine and natural disasters force people to leave their homes. Oftentimes, refugees have to live in inhumane conditions in refugee camps.

Help is committed to supporting displaced people around the world. Currently, we are providing emergency aid for refugees in Ukraine. In addition, we fight the causes of flight and aim to create perspectives. Donate now for our refugee relief worldwide!

The number of refugees worldwide is higher than ever before

A sad record on World Refugee Day June 20, 2022: over 100 million people were on the run in the previous year. The number of refugees has more than doubled in the last ten years. Over half of them (53 million) are "internally displaced persons", meaning people on the run within their home country.

It is alarming that the majority of the refugees come from just five countries: Syria, Venezuela, Afghanistan, South Sudan and Myanmar make up 68 percent of the world's refugees, according to the United Nations. In Syria, a cruel civil war has been raging for years. Around 13 million Syrians were displaced from their homeland - 6.7 million of them had to leave the country. The Syrian refugees need water, food and medical care most urgently.

Experts assume that the number of refugees will continue to rise in the future. The climate crisis, in particular, is forcing more and more people to leave their homes as the number of droughts, floods and tropical storms is steadily increasing. By 2050, there will be an estimated 140 million climate refugees.

Supporting refugees around the world

Help is committing itself to refugees in many countries. Not only do we provide direct support to people, but we also fight the causes of flight. In acute situations we provide emergency aid and provide the refugees with food, water and medicine.

Help provides support to people who are fleeing worldwide. Presently, we are providing emergency aid for refugees in and from Ukraine.

Support our commitment for refugees!

Help us to support families in need. Every donation counts!